The Olympics are on again! As always, excitement and drama abound. A recent controversy from last week surrounded the involvement of Russian athlete, Olympic medalist and competitive swimmer Yulia Efimova in the games. As with other Russian athletes, her entry at poolside at the games has elicited an almost expected series of jeers signalling that she does not deserve to be there - in the midst of genuine and bona fide athletes. As Jamie Strashin suggests, Russian athletes have become the villains, or as Bruce Arthur states, the bad guys of the Rio games. 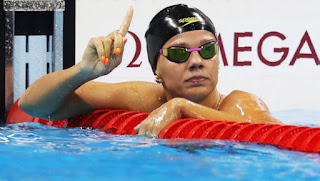 Why has Efimova's presence generated such reactions? In the eyes of other dedicated athletes and sports enthusiasts, Efimova has committed perhaps the most unpardonable of sporting sins - she was found guilty of using unauthorized substances, not just once but twice. One of her competitors and very recent Olympic United States gold medalist Lilly King for the 100-metre breaststroke competition (Efimova came in as a very close second winning the silver) has discussed her displeasure at the presence of Efimova and others (including US athletes) who have used prohibited substances in the games. To be sure, Efimova has certainly provoked some of this when, after winning her semi-final race for the 100-metre breaststroke competition, she lifted her finger up in the air suggesting/indicating that she was number "1" (see image above). This was a move that did not sit well with King and many others. It should be noted that Efimova until very recently was barred from participating in the games until a panel of the Court of Arbitration of Sport permitted her involvement as a competitor (see Efimova v ROC, IOC & FINA, 2016). 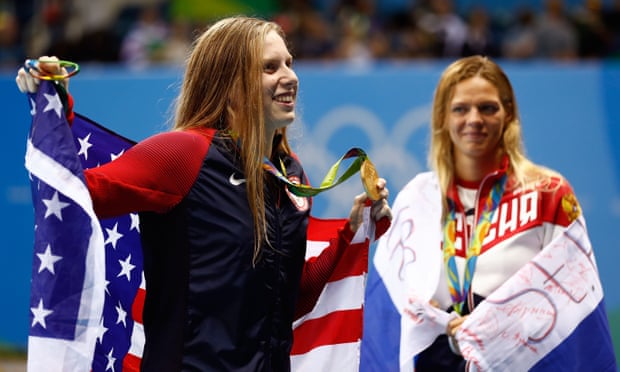 After narrowly winning the final race, and to illustrate her disgust at Efimova's mere involvement and arrogant posturing, King "slapped the water in between [she and Efimova] in triumph. [King] shot over a stare. And Efimova didn’t raise her finger" (Abad-Santos, 2016). King later asserted "we can compete clean and still win at the Olympic Games" (Abad-Santos, 2016). She further opined (in reference to the presence of certain US athletes who were part of the Olympic team but who had tested positive in the past): "I think people who are caught on doping offences should not be on the team. No they shouldn’t" (de Menezes, 2016).

King is not alone in her views. Renowned Olympic athlete and swimming champion Michael Phelps, who has also competed phenomenally in the current games, has similarly expressed the following: "I think it's sad that we have people in sports today who are testing positive not only once, but twice, and still having the opportunity to swim at these Games" (de Menezes, 2016). He further posited: "It breaks my heart and I wish somebody would do something about it" (de Menezes, 2016).

Is the reaction Efimova has generated deserved? Should a person such as her be barred from participating? Is it enough to say that if a person has been caught twice for using prohibited substances that they should be banned from the games? What space do we give for considering the circumstances surrounding the acts before coming to such a conclusion? With respect to her first violation, Efimova was subjected to a 16-month ban after having tested positive in 2013 for DHEA, a banned steroid prohibited by the World Anti-Doping Agency (WADA). She served her "sentence". Furthermore, in connection with this first violation, a doping panel established by FINA (the Fédération internationale de natation or International Swimming Federation) determined that Efimova had been negligent by failing to read the label of the product concerned (see Efimova v ROC, IOC & FINA, 2016, para 2.3). However, she had not knowingly and intentionally consumed a banned substance.

In the second instance, earlier this year, Efimova  tested positive for Meldonium, a substance which has been banned by WADA as of January of this year. As told by an expert to NPR's Jon Hamilton, Meldonium is a heart medication which improves blood flow - this in turn brings oxygen to needed muscles thus enhancing performance. WADA however indicated that it was unclear how long Meldonium stays in an individual's body. As such the existence of the Meldonium detected in Efimova's test results may have been as a result of what she consumed prior to the ban taking effect.

So, is it enough to just say that a person who has tested positive for prohibited substances should be banned for life from the games? I think the answer has to be - the magical - "it depends". If someone has been found to have knowingly and intentionally consumed prohibited substances, not once but twice, the calls for their permanent removal from the games and certainly from competing in the sport more generally may be justifiable. There is a legitimate concern about the overall reputation of the sport and its competitors. There are also valid concerns about fairness to those who do abide by the rules.

Yet, when the conduct in question falls short of this level of egregious and intentional misconduct, does a one-size-fits-all punishment (and the stigma attached to it) seem deserved or justifiable? Efimova acknowledges her first violation and the FINA doping panel characterized her conduct as negligent. This falls short of the degree of fault we typically attribute in law to someone who does something intentionally and knowingly. To provide an example, as a matter of law, we don't refer to someone who kills another person through negligence as a murderer. Or, in a different context, as the famed United States Supreme Court justice Oliver Wendell Holmes once stated: "even a dog distinguishes between being stumbled over and being kicked." 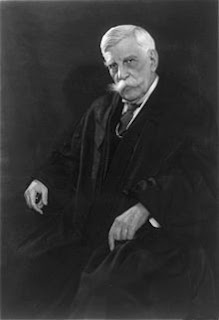 Wearing my criminal law prof hat for a further few seconds, what does it mean to serve one's "time"? Efimova was subjected to a suspension and did so (as well as having endured the larger and continuing stigma that comes with that). I am not an athlete (actually I'm pretty much a couch potato), but 16 months seems to be a long time in the sporting world where getting older doesn't necessarily always work in an athlete's favour.

On the issue concerning her consumption of Meldonium, assuming that she did not do so after the ban came into effect, there are significant problems with punishing her for conduct which had not previously been prohibited. While the criminal law is not involved, there is nevertheless a maxim worth noting: nullum crimen sine lege (no crime without law). Essentially, no one should be considered criminally liable for actions that were not considered criminal offences when the acts in question were committed. Adapting that principle here in a non-criminal context, it would seem problematic to say that Efimova was caught doping a second time when it is not clear that there was a "second time". Is there any clear evidence that she ingested (intentionally or otherwise) the Meldonium after the ban came into effect in January of this year?

A part of the discourse that we see here is the difference between those competing "clean" and those who do not. The dichotomy between "clean" and "unclean" may not be quite so simple. Is it merely a difference between using and not using drugs? As one NPR article written Jon Hamilton suggests, many athletes engage in what is referred to as "legal doping". According to Hamilton, legal doping "involves taking a legal prescription drug that may improve performance but hasn't been banned by anti-doping authorities." Don Catlin, an emeritus professor at UCLA who once ran the university's Olympic Analytical Laboratory indicated to Hamilton that "athletes are experimenting with an ever-widening range of prescription drugs in an effort to get an edge."[1] As such, the difference between a clean and an unclean athlete may not be the difference between those who use performance-enhancing drugs and those who do not. Rather the difference may be between the use of prohibited and non-prohibited drugs. To the extent that the latter are legal and thus more legitimate, athletes who consume them may be "clean" - that is until WADA prohibits the use of such medications.

There is of course more to all this than just this newly televised rivalry between Efimova and King (which makes for great television). Sports and the Olympics are not a-political events. Athletes' identities in the games are (most) tied to the state which they represent (a subject on which my Jurisculture colleague Alexandra Harrington has written about elsewhere - see here and here). In the case of Russia, Efimova's country of nationality, the recent revelations concerning the government's involvement in an organized doping program of its athletes has been widely condemned - many Russian athletes have been barred from competing (including Efimova originally). Efimova's presence, as a symbol of her country of nationality (though, if I understand correctly, she has been more regularly resident in the United States in recent years), is a reminder for all present in the games of the Russian government's flouting of international norms concerning the doping program. Lying not too far in the background as well is the criticism of Russia's involvement elsewhere in world affairs - in the Ukraine and Syria. Fairly, or unfairly, the jeering directed at Efimova may very well be for more than just a criticism of her own personal behaviour but a form of opposition to a larger constellation of objections aimed at Russia's defiant conduct both in connection to sports but also to other geo-political moves.

L'Affaire Efimova invites to ask a couple of questions. First, should an athlete who has tested positive for prohibited substances, regardless of circumstances, been permanently banned from competing at the Olympics? Second, what does it mean to be a 'clean' versus 'unclean' athlete where many athletes use non-prohibited substances to possibly gain some advantage.

[1] As an aside, what can be said of the use of treatments which have little or no scientifically proven positive effects but act as placebos? Believing that such treatments have an impact may provide some psychological advantage to athletes who use them. See Katherine Hobson, "How The Placebo Effect Could Boost An Olympic Performance" NPR (14 August 2016), online: http://www.npr.org/sections/health-shots/2016/08/14/489678956/how-the-placebo-effect-could-boost-an-olympic-performance